Official rubrics for an SAT essay to score a rating of Advanced (4) is described in two levels, structure and sentence. The sentence level requirements describing the grammar standard that are traditionally heavy in SAT is placed second. The first half of the rubrics are all about the structural integrity of an essay—progression of ideas as the rubric dubs it. The reason of such a shift in writing is the fact that average writing proficiency among SAT students—mostly American high school graduates—has become rather low in terms of structure as opposed to sentence grammar.

Rubrics on essays in new SAT for scoring Advance (4):
To help students prepare on SAT essays, mind2learn has developed an Idea Progression Model (IPM) that employs a five-step structure. The IPM progress starts with initiation, moves on to development, transition and extension, and ends with conclusion. Writings without a clear idea progression in structure will be dysfunctional.
​Take the following writing examples on colors for detailed illustration of the application the IPM. 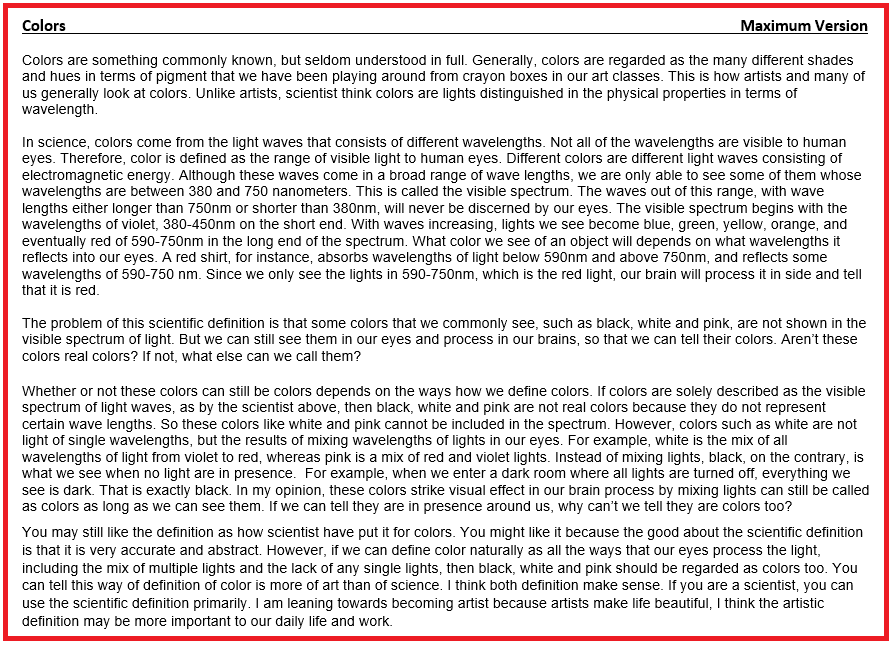 ​This maximum version of essay can be considered a slightly above average example in SAT. Although it contains a complete structure following the IPM, clear reasons prevents it from being rated higher. A few pieces of information are placed in different parts of the essay so that the reading of the entire essay give a feeling of verbosity. The scientific definition, for instance, are repeated in full in the 1st, 2nd, and in 4th paragraphs. Secondly, the essay loses its objective tone along its progression, and ends with a very subjective in the last paragraph. Subjectivity and verbosity are in fact two tendencies presented in most essays by American students. If you recall the Grammar Quad, these problems shall be primarily from the completion section embedded with risks on concision and consistence. 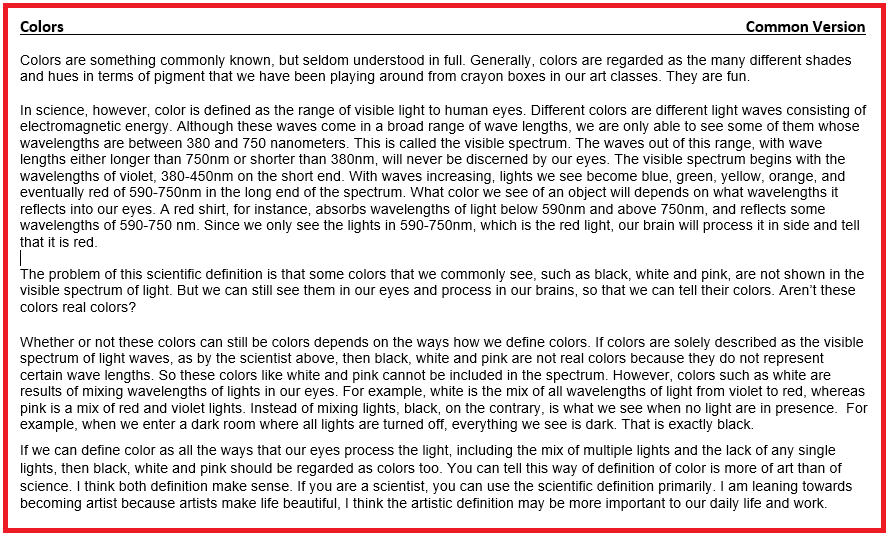 Although subjecgtivity and verbosity is mostly corrected in the above common version, it still suffers from significant concision risk. Intra-paragrapph duplication still exists. Since SAT is in fact not very strict in scoring your essay, this may be considered as Advanced (4). Our nation's education has made it a relatively low bar for high school students.

Let’s stretch ourselves further and make an extreme concise version of the essay. This above does not lose any information in the original essay, but has trim off 60% of the original language. It stretches writing efficiency to the most. You don't want do this for the sake of SAT, but to practice on command on concision and precision. Such practice help you to stay away from the verbosity risk as far as possible.
​
In order to strike a targeted pitch required by the highest SAT standard, let's look at the publishing version in the following. This version, written by an editor of Encyclopedia of Britannica, employs an objective but vivid language that exemplifies a unique style in reference publishing. Even if you don’t have to write as this version to score at 4, it will be necessary that you practice towards this level for SAT. If you just aim the 4, your chance of knocking it won’t be as certain. 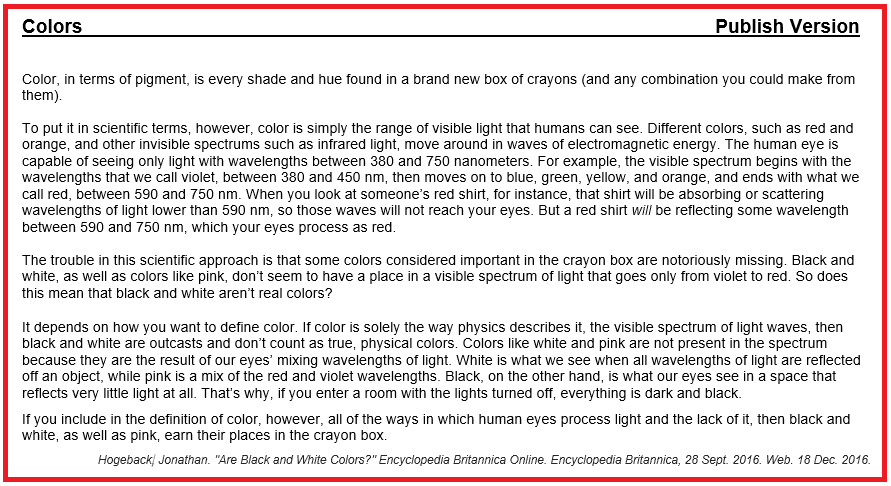